Self guided 7 night, 5 day cycling mtb holiday on route GR13, the Via Algarviana. 300 kms of ancient tracks connect the town of Alcoutim in eastern Algarve to the Sagres promontory at the most southwestern tip, better known as Cape St. Vincent.

Since Mozarab times (XI century) the cape is considered a 'Promotorium Sacrum', a sacred spot motivating pilgrims to travel to the location where supposedly the relics of St. Vincent arrived by boat. The connection between the Guadiana river and the cape for the Mozarab people became known as the 'Paths of St. Vincent' and is the legendary route where the itinerary of nowadays Via Algarviana is based upon.

As St. Vincent's paths, GR 13 is designed for walkers. However local mountainbikers have proved the route to be well suited for able cross country cyclists with only a few minor stretches to be dealt with dismounted, carrying the bike.

Besides riding medieval paths the Via Algarviana seeks the rural tracks of the hilly Algarvean interior. A surprising sequence of ways connecting the people of southern Portugal to their fields, hamlets, settlements and villages. Some tracks still being used by local farmers and inhabitants, other trails almost forgotten. All together they make a tough cross country mtb ride to experience the serene simplicity and beauty of life and nature in the hills and mountains of inland Algarve.

We aim to provide fit and competent mountain bikers with route information and overnight reservations for an affordable self guided cross country mtb holiday. Accommodation is based on a bed & breakfast service in 3 star hotels or charming rural guesthouses. Choice of accommodation in the scarsely populated vast interior is very limited. However we guarantee you will sleep untroubled and comfortably after a decent day's biking and warm hospitable welcome. 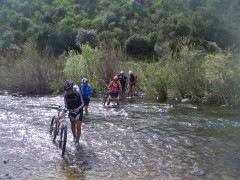 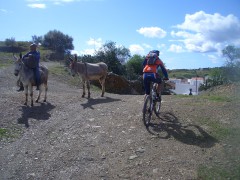 Leaving Alcoutim, a prolongued goodbye to the Guadiana river and Spain. The first day of riding is an excellent introduction of what mountain biking on the Via Algariana is about. Deserted tracks, some river crossings, isolated hamlets with their comunal bread ovens and cordial inhabitants and some serious climbs before arriving to Vaqueiros. A vast, little populated area, where for example rock rose, cork and medronheiro (arbutus unedo) grow abundantly. Vaqueiros is a bit of a bigger village with a great local restaurant where you will find all you need to recover from the first day's experiences.

At first some further exploration of the Tavira mountains then after Cachopo changing into the Caldeirão mountain range where the schist rock hills get a bit higher and valleys a little deeper. Not an easy stage, but you have an entire day to complete it whilst observing agricultural mountain life. At the end of the day efforts are rewarded with first some great mountain views to the west after passing Barranco do Velho, then followed by a great rocky descent leaving the Caldeirão mountains into the lower barrocal area around Salir.

The stage with most change in scenery partly due to passing the more inhabited barrocal zone. As a grateful recipient of mountain water the innumerous springs turn the red coloured barrocal clay into fertile farming land for the dry orchard culture as almond, fig and carob as well as the citrus culture, orange and lemon which spread their wonderful smell around the grooves in winter and spring. After having passed the regional farmer's town of São Bartolomeu de Messines we go back to the schist rock tracks along the Funcho reservoir. We enter the Silves mountains with a big climb at the end of the day, but soon the first views of the impressive Moorish castle announce a well deserved rest in Silves, or Xelb, as the capital of Al Gharb al Andaluz was called under Arab reign.

Day 4: Day of rest in Silves

You will most certainly want to make the most of your stay in Silves. Steeped with history, it was once the Moorish capital and is home to the best-preserved castle in the Algarve. The views from the castle over the town and the surrounding countryside justify the rather steep ascent along narrow cobbled streets. There’s a café just by the entrance to the castle where they play live music, a great spot to wile away an hour or two. Host to an annual Medieval Festival, one of the biggest in the region, Silves is ordinarily a sleepy town, where you get the real feeling of taking a step back in time as you wander through the myriad of back streets. 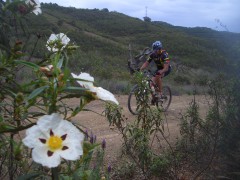 Today's shorter stage seems an attractive invitation to explore a little more of the interesting town of Silves as for example a visit to the castle, the archaelogical museum, or cork museum. Contemplating the Roman bridge from the terraces along the Arade river is also a great way to start the day. However one can not linger too long because there is still some serious biking to do. Leaving Silves there's a series of short violent climbs on the steep forested hillsides. After descending to and crossing the Odelouca river we enter the Monchique mountains and the long climb to Picota awaits. It is the longest climb on the Via Algarviana and at the very top we have to negiotiate the big granite blocks of volcanic origin and carry our bikes across. But if the 360º views on top do not make it all worth while, then the descent into Monchique through the dense forest with eucalyptus, chestnut and cork will.

Although mainly going downhill the last stage of the Via Algarviana acumulates a considerable amount of altitude meters mainly due to its distance and the first uphill immediately when leaving Monchique. With a bit of luck on a non-foggy day there are great northern views from the top of Foía before following the forestry trails to the typical mountain village of Marmelete. From here it is comfortably cruising downhill leaving the mountains back into a bit of barrocal at the Bravura reservoir. The hill range of Espinhaço de Cão is covered by a large pine forest near Barão de São João and has to be crossed before arriving at the wide open landscapes of te Vicentina natural park.

After several days of inland scenery with possibly warm valleys and hot climbs, the smell of the sea and always generously blowing winds in this area make a refreshing change. The last kilometers on the Sagres peninsula are a treat. No more hills to deal with, only the bumpy surface of the irregular round rocks. But this is easily covered up by the attraction of the cape's lighthouse, its unique location, its biodiversity with some endemic plant species, the mystic of its historic grounds and the sweet and sour sensation of ending a 5 day bike ride with friends sharing ups and downs in southern Portugal.

From here we will transfer you to Albufeira for your last night’s stay. Despite being one of the busiest resorts in the Algarve, some of Albufeira’s Old Town still retains the essence of the village it once was, with narrow cobbled streets winding up and around the hillsides and typical single storey houses lining the roadside. Your hotel is conveniently located to explore the town and beach (a perfect place to recover from your day’s cycling).

We will transfer you from your accommodation for your journey home. 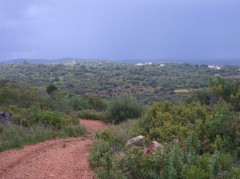 Above mentioned price is all year round except for July and August, per participant based on two persons sharing a double or twin room.

We do not recommend to go and bike the Via Algarviana during the months of July and August due to the elevated temperatures in the Algarvean interior. Any other time of the year is well possible. In June and September it can be a warm ride. November and December may have some more rain, January can be chilly but in any of these months you can have a pleasant sunny crossing of the Algarve.

In co-operation with Almargem and Algarve Bike Holidays

16/03/2022 08:00
Following the success of the Rota Vicentina tours over the last few years Algarve Bike Holidays tried to create a...

05/07/2022 08:00
This touring cycling route is all across the Alentejo province passing through the region's famous wine growing area...